​Book Review &
Exclusive Behind The Scenes Interview with Author
​ Ivelisse Rodriguez
​The novel was published by the Feminist Press in July. Rodriguez stunningly manipulates the line between reality and fiction in the pursuit of lasting love. Love, a concept that many find foreign today, is resurrected through daring and reflective prose. She expands on Nuyorican literature, a genre in which Puerto Rican authors and poets discuss migration and a split identity between the United States and Puerto Rico. She dives into the intense and complicated world of modern love, incorporating themes of femininity and identity seamlessly from story to story whether through a crusade for love or through their culture.
Each story follows a young Latinx coming-of-age story, as they struggle to define themselves. Readers will discover cultural and societal contradictions and myths about the meaning and value of love and marriage. Accessible to all readers, Rodriguez incorporates modern feminist concepts such as sex positivity for all genders, allowing readers to empathize with each character. Several stories question the meaning of womanhood in its various forms, and its association with love. Others show a side of love not often shown; one that leaves characters damaged. Rodriguez tempts readers with a debate about the benefits of love in the titular story, “Love War Stories”. While the younger generation at first strives to find love in all relationships, their mothers warn them about the potential damage to one’s sense of self. LWS allows readers to explore both arguments, as well as how a society can affect the ways that womanhood is perceived.

In two stories, Rodriguez incorporates Puerto Rican poet and founder of the Nuyorican movement, Julia de Burgos’s poetry. De Burgos explores the ways that a woman can belong to others, while still seeking independence from the bonds. To be outside of one’s culture is a common theme in the genre, but Rodriguez expands on the feeling of “otherness” in another culture to include the contradiction of becoming a woman. Marginalized women, like de Burgos, who didn’t fit the mold of a typical woman, are paired up with women who strictly follow a culture’s opinion of what a woman should be. De Burgos, as well as other characters within the anthology, exhibit sex-positive behavior unseen in other Nuyorican literature.

“Love War Stories” is one of the best novels I’ve read in awhile. Rodriguez incorporates womanhood, identity, culture, and modernity to form an accurate portrait of love for many Puerto Ricans living in America. Her stories are accessible to women and men who enjoy reading novels featuring multicultural and dynamic characters. Her writing abandons formality and prefers a sense of camaraderie with the audience; the characters feel more like old friends than words on a page. Horrible Tinder dates aside, “Love War Stories” exemplifies the hope we feel on a good date: engaging banter, light humor, and the unmistakable desire to find love.
​
Born in Arecibo, Puerto Rico, Ivelisse Rodriguez grew up in Holyoke, Massachusetts. She earned a Ph.D. in English-creative writing from the University of Illinois at Chicago. She is the founder and editor of an interview series published in Centro Voices, an online magazine of the Center of Puerto Rican Studies, focused on contemporary Puerto Rican writes. She was a senior fiction editor at Kweli and a Kimbilio fellow. She is currently working on a new novel, “The Last Salsa Singer” about the story of a friendship in the forefront of salsa music in Puerto Rico.​
Interview with
Ivelisse Rodriguez 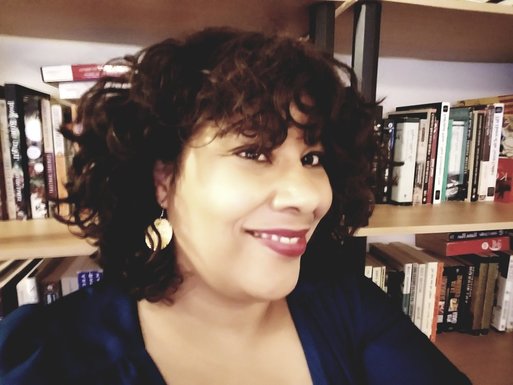 Photo Credit:  www.masterteacherscollective.com/ivelisse-rodriguez
MM: What was the first book you read?
IR: I don’t even know. I remember reading Judy Blume and Beverly Cleary. How old are you in third grade, like eight? I just remember always reading. I mean, obviously, not when I was three, but I don’t know after that. While I honestly wasn’t like a constricted writer. For a long time, it was this thing that I said I wanted to do, but I didn’t do. And then, I took, maybe two creative writing classes in college. And then, I don’t know why but I applied to M.S.A. programs and I got into one, so, “I’ll try this”. I still needed to learn how to write more after the program, and that’s not their fault. And then I got my Ph.D. in creative writing and my writing was becoming stronger. A lot of times I was scared, or fearful of facing the page, where like you go to write, and are just consumed by fear and then you don’t do it. In 2015 I quit my job, my full-time teaching job and I started working on a novel. The next year, I entered the Feminist Press contest, the Lewis Merryweather contest, and obviously, I didn’t win, but they decided to publish it anyways, and here we are….

​MM: In some of your stories, Holyoke, Mass: An Ethnography, and Hija Chango, you explore a divide between white and Latin-American communities. Do you think that there are some cultural differences between how people experience love and relationships?
IR: When I was thirteen, we were hanging out. Most of my friends were pregnant, not me. We had like, bodies, and stuff. And I would see white girls on TV, and they just seemed so young, in a sense. It was always weird to me, like a different thirteen. We had like, older guys after us, which sound bad now. It was so normal. (laughs). Again, there’s like this idea that you need a man, but men are terrible. That’s definitely a Puerto Rico thing. In Borderlands, by Gloria Anzaldúa, the girls had to be covered up when were they around their cousins or their uncles. Like all men are suspect, that even if you’re a little girl, you have to be careful around them. It’s that mentality and in other Latino cultures. I don’t know if other cultures have the same thing.

MM: I read somewhere that you’re working on a new novel about salsa music.
IR: It’s called The Last Salsa Singer. It’s about these two friends, Vicente and Richie. Richie is
lovestruck over Lucy….be the one to save her. Vincente is totally appalled by that. They had made this song making fun of their relationship and Vincente’s hope is that Richie will get rid of Lucy. And it ultimately becomes their most famous song...Vicente loses his legacy because he can no longer have what he wanted because of the song. Another part is how Vicente and the band made fun of Lucy, she’s just a girl, but she ends up destroying their lives. It’s also supposed to be about friendship, over romantic love. I want to talk about the other parts of love that don’t get talked about as much, but I want to position it so they’re more important than romantic love.
​